In this step, we'll deploy a few tables to the airlinedb database we've created in the previous steps. As we do this, we will exercise the approval and rejection workflow in SchemaHero to understand how to validate these changes before they are executed.

Let's start by creating a simple table to list airports. Later, our data model will use this when defining routes.

We want a pretty simple table with just 2 columns to define the airport code and the name of the airport.

Instead of writing that SQL, let's create this as a SchemaHero table file.

Create a new file named airport-table.yaml and paste the following YAML into it:

After saving this file, run kubectl apply -f ./airport-table.yaml to deploy it to SchemaHero.

Lines 1-2: This is the GVK (Group, Version, Kind) of the object. This should always be set to these same values, however the v1alpha4 may change with future releases of SchemaHero.

Line 4: This is the name of the Table object. While it's common to set this to the same name as the actual database table, it can be anything. This does need to conform to Kubernetes naming standards, which includes not using any _ characters.

Line 5: This is the namespace to deploy this Table object to. This is unrelated to where the Postres database is running, but must match the namespace that we deployed the Database object to in the previous step.

Line 7: This is the name of the Database Kubernetes object that we deployed in the previous step. You can see the names of available databases by running kubectl get databases -n schemahero-tutorial.

Line 8: This is the actual name of the Postgres table. You can use any supported Postgres characters here.

Line 9: We are defining a table schema.

Line 10: This key indicates that the schema below should be mapped to a Postgres object. SchemaHero supports mysql and cockroachdb schemas also.

Line 11: We are defining the code column as the primary key. Note that this is an array object, and composite keys can be defined by listing more than one column. Primary keys can also be defined in the column definition, if desired.

Line 12: We are defining the columns in this table now.

Lines 13-14: Create a column named code and ensure that it has the char(4) data type. There are other options here, but we aren't specifying any, so this column will get defaults. Because this column is the primary key, the column will automatically have a NOT NULL constraint added.

Lines 15-18: Create a column named name and ensure that it has the character varying (255) data type. We are also adding a NOT NULL constraint to this column to make it a required column.

Although we've deployed the table object, the schema is not automatically altered. Instead, a new (or edited) table object will generate a migration object that can be inspected and then approved or rejected. By default, SchemaHero requires an approval process because some database schema migrations can be destructive. Immediate deployments (without approval) can be enabled by adding a key to the database object.

To see the pending migration, run:

(Note, if you see No resources found, wait a few seconds and try again. The SchemaHero Operator has to complete the plan phase before the migration is available).

Before approving this migration, let's view the generated SQL statement that is attached to the migration object. Take the ID from the output of the previous command, and run describe migration:

At the top of this output, the Generated DDL statement is the planned migration. This is the exact SQL statement(s) that SchemaHero will run to apply this migration.

Below that, SchemaHero provides 3 commands for the next steps:

apply: Running this command will accept the SQL statement and SchemaHero will execute it against the database.

recalculate: Running this command will instruct SchemaHero to discard the generated SQL statement(s) and generate them again. This is useful if the database schema has changed and you want SchemaHero to re-execute the plan.

reject: Running this command will reject the migration and not execute it.

After looking at the generated SQL command, we can see that it's safe and as expected. The next step here is to approve the migration so that SchemaHero will execute the plan.

Running the command will produce:

We can see that SchemaHero has processed this by running get migrations again:

Finally, let's verify this migration in Beekeeper Studio or whatever database management tool you are using.

Clicking Refresh on the "Tables & Views" header in the left nav, we now see the airport table under "public". Expanding airport and you can see the columns in the table. 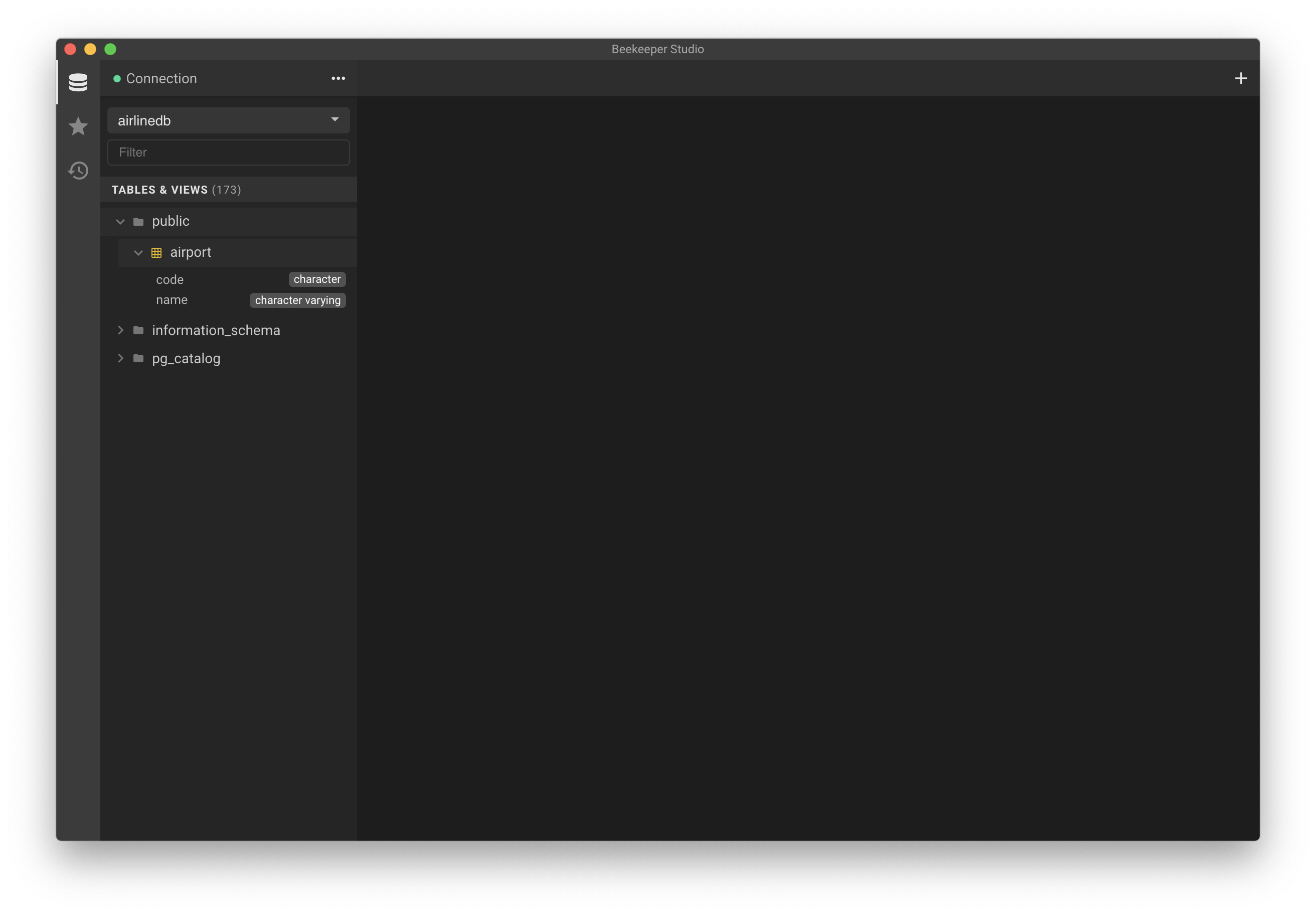 Next, we will create and deploy a couple of additional tables, but making edits to them after the initial deployment. Continue to the modify a table tutorial.